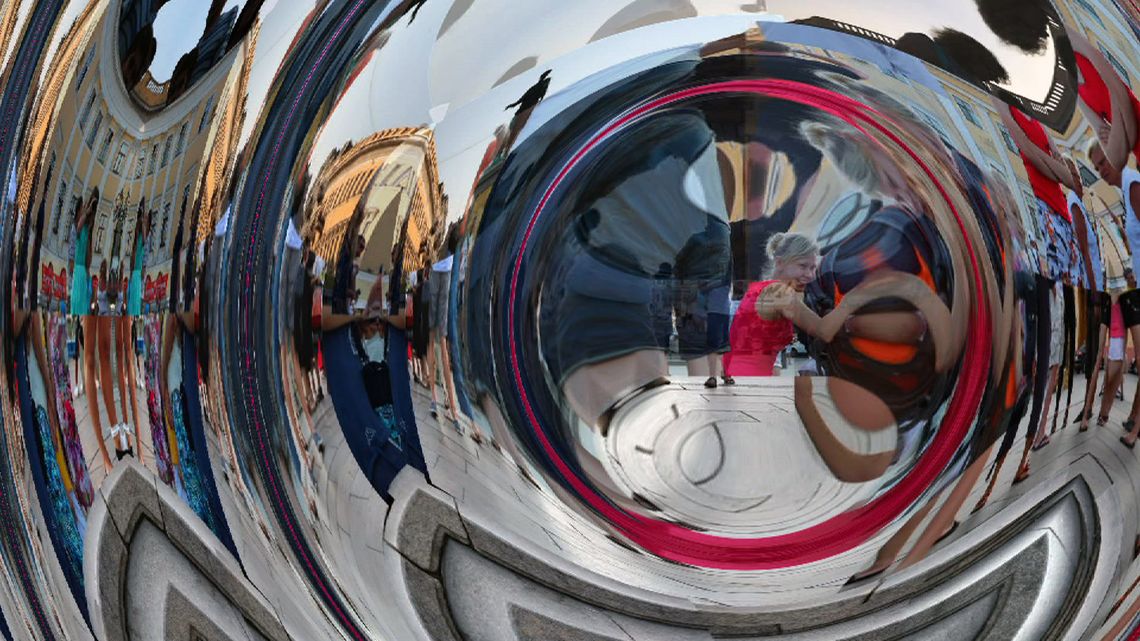 [Text nur in englischer Sprache verfügbar] https://youtu.be/XH9NoJCjddw
The “ODESA COLLIDER, or Turbulence vs Quantum Transition” is a panoramic presentation of some of the most perilous political flashpoints: Odesa Potemkin Stairs of 1905 - the site of both revolutionary and cultural phenomena (scene from «Battleship Potemkin» by Sergiy Eisenshtein, 1925).
Through the Colliding Ideas project connect physics search for Universe understanding with civilizational cataclysms we live now shaping new challenges. This approach refers also to the notion of the Event Horizon, which is in physics an imaginary border in space-time, dividing those events (points of space-time) that can be connected with events on lightlike (izotropic) endlessness of lightlike by geodesic lines (by the trajectories of light rays), and those events, which such connection is impossible. There are two lightlike endlessnesses at this space-time: related to the past and future, Project is referring to Large Hadron Collider. Through Colliding Ideas we explore the worlds within the physical sciences and ask what it is like in that world, how it relates to our social world, and how it affects us culturally and physically. Art Collider through design of panoramic video installation and object of light-boxes researches under planetary conditions human being collisions and energy outcome. The interplay between micro- and macrosystems, between physical and social worlds explores a variety of contemporary and historical phenomena. To explore the tension points, which structure and collect experience, in which we are wrapped and immersed in it, is a destiny of new media. Project is about complicity; it raises awareness - to build Renewable Future obviously it is necessary to be able to have future.
In the project, time-space will be presented by panoramic video-projection that consists of 24-60 fragments of moving images, which are revolved with acceleration in an artistic collider, activating a mechanism of audio-visual jumps where certain fragments can gradually be substituted by archival videos. Video presents a panoramic fluid urban landscape as a virtual breathing, kaleidoscopization of chaotic urban structures, unlocked through decryption keys that evoke transformational metaphors of human energy. Where human being can be immersed into cosmogonic fluid environment. In the project a fragmented representation of a time and space makes reference to the quantum theory and coexistence of multiple time-space universes, but at the same time, it is about a time and space that has existed historically.
It is an invitation to co-experience the complexity of the world, dealing with violent conflicts, social upheaval and war events. Art project, fed by obscured history, political urgencies, and documents acts as a catalyst for the culturally charged encounters – experiences, feelings, a kind of shared breath – that materialize through the local environments and social relations. Curving these experiences all around the viewer’s body turning and craning to experience each moment, Collider can enfold the viewer in embodied reality among manifold collisions of today, past and future. "...The remotest and extraneous to the each other phenomena are distant one from other in time, origin, spirit, through the co-experience… and the sharing of fate cognize the mutual acceptance, changes, confluence used in so magic correlations, that own meaningfulness of things arrives at the same maximal size, as meaningfulness of unity, in which they accrete like comparable parts" (Georg Simmel).
The “Collider” project, working with the events that have formed the world in which we live now, raises the question: is a person a particle in the system of accelerators of global forces, or the energy of interaction investigating new values, new forms of thought and new ways of existence in the world – insisting that ‘another world is possible’? Whether CURRENT STATE OF OUR WORLD with FLUCTUATIONS, OSCILLATION - TURBULENCE in the SOCIAL field will lead to the PHASE of TRANSITION?