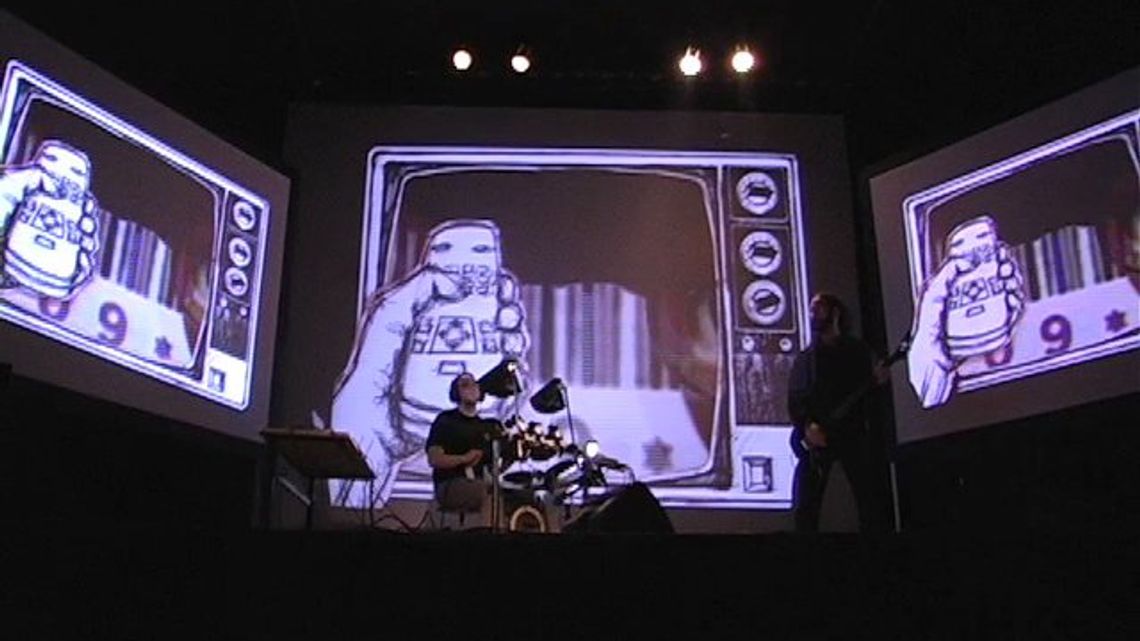 On stage, a trio composed of two musicans and an animated film projected on a large screen suggests a lively show on a musical as weel as a visual ground. The aim is to create a strong link between these two medias : video and live music. The show is built on a successive visual presentations the effect of wich is intensified with music and background sound effects.

The different visual animated presentations deals with some of our contemporary issues and questions that rise from them. The themes deal with bad feeding, consomption society, moreover the stress from the world of work. The spectator dives into a subjective environnement directly related to one’s own thoughts.

The video part is composed of biro drawing sequential animated bits mixed with televisual pictures. Various sound effects recorded on a sound track are embedded through the performance. The music played on stage is some of “metal” inspiration. The sound is voluntary rough cast, not to say “raw”.

In 2001, two artists, a musician and a drawer join together and formed the band “Throw Up”. Aurélien, guitarist and drawer is influenced by the american “Thrash Metal” bands trend of the eigthies and nineties. Benjamin has had a musical education as a percussionist. He has been impressed by the drum-player technique of Dave Weckl, Igor Cavalera or Vinnie Paul. At the time, Benjamin was already

musically open minded and took a special interest in the electronic music.

In 2002, their first nine title demo CD is released. It is named “Apocalyptic Blast”. This CD is definitely a of “Thrash Metal” trend.

In 2003, another demo CD named « Abused and Humiliated” is released. It counts

seven new compositions. This demo CD is in the same former one vein. Aurélien

illustrates each musical piece with a drawing. A strong link relates the drawing to the musical part. Each song has got its pictorial double.

In 2005, the band is called by a young film producer to compose and expound the

original sound tracks of a short named « Primaire ». This is an opportunity for the

band to take an interest in new tones and initiate a recording of new sound effects.

gets more and more involved in mastering aspects and sound recording. At the time,

In 2007, a new demo CD entitled “Binary” is recorded. Deriving benefit from their

structured pieces. The style of the band changes. The music is still “metal” but mixes

For more tha, a year (2007-2008), the band conceives a new multumedia show. The “A live - alive” project yields and equal part to their animated film, sound effects and live music. They strengthen the link between several branches so important to them. During their performance the two ones manage to yield the energy proper to a live concert expected from their audience and create a visual universe of their own. The whole of it is ornamented with sound designs using the large range of effects produced from eletronical instruments.

In April 2009, the band takes part in the fourth international festival of vjing :

Vision’R 2009 which takes place in Paris. The “A live - alive” projects receives an

enthusiastic reception from the audience at this maiden performance. 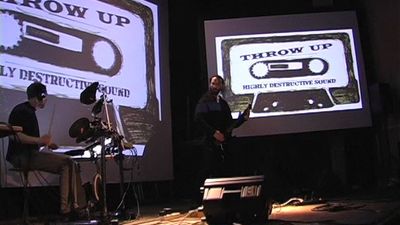 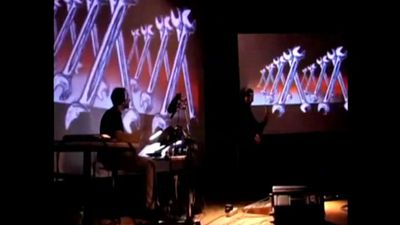